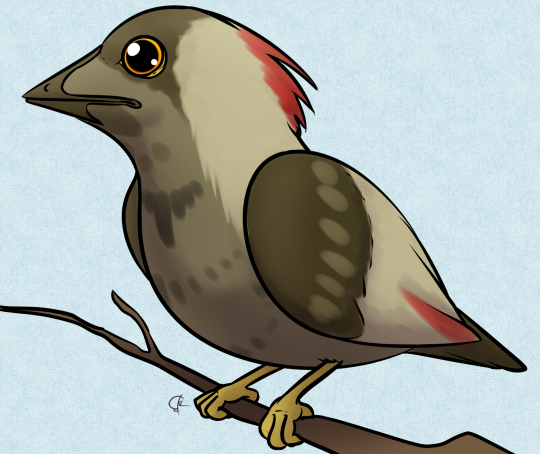 By José Carlos Cortés Etymology: Bird from La Noguera First Described By: Lacasa Ruiz, 1989 Classification: Dinosauromorpha, Dinosauriformes, Dracohors, Dinosauria, Saurischia, Eusaurischia, Theropoda, Neotheropoda, Averostra, Tetanurae, Orionides, Avetheropoda, Coelurosauria, Tyrannoraptora, Maniraptoromorpha, Maniraptoriformes, Maniraptora, Pennaraptora, Paraves, Eumaniraptora, Averaptora, Avialae, Euavialae, Avebrevicauda, Pygostaylia, Ornithothoraces, Enantiornithes Status: Extinct Time and Place: About 129 million years ago, in the Barremian age of the Early Cretaceous  Noguerornis was found in the La Pedrera de Rúbies Formation of Cataluña, Spain  Physical Description: Noguerornis was a small Opposite Bird, known from an incomplete skeleton as well as some feather impressions. It was about the size of a modern Lovebird, weighing somewhere around 50 grams. It also had a propatagium, a membrane structure found in modern birds that goes from the shoulder to the inner wing, which is covered in feathers and aids in providing lift for the bird. Fossils rarely preserve this structure, making Noguerornis notable for having it. It is difficult to tell what its role would have been in the evolution of flight in dinosaurs, but probably aided in Noguerornis flexing its wing, helping to give more support during flight. Despite having this structure preserved, it is known from fairly scattered remains, and as such little else can really be said about its life appearance. Diet: Without a skull, we cannot know what the diet of Noguerornis was, since Opposite Birds had a wide variety of food sources. Behavior: Unknown Ecosystem: Noguerornis lived in a shallow lake environment near the coast, filled with frogs, lizards, and crocodylomorphs such as Montsecosuchus, which probably would have preyed on Noguerornis to some extent. At least some other Enantiornithes were also present in the region. Other: Noguerornis is a rare example of an Enantiornithine (Opposite Bird) named before the 21st century. ~ By Meig Dickson Sources under the cut  Chiappe, L., Lacasa-Ruiz. 2002. “Noguerornis gonzalezi (Aves: Ornithothoraces) from the Early Cretaceous of Spain. Pgs. 230 – 239 in Chiappe and Witmer (eds.) Mesozoic Birds: Above the Heads of Dinosaurs. University of California Press, Berkeley, Los Angeles, London. Galobart, A., M. Suñer, B. Poza. 2011. Dinosaurs of Eastern Iberia. Indiana University Press. Lacasa Ruiz, A. 1989. Nuevo genero de ave fosil del yacimiento Neocomiense del Montsec (Provincia de Lerida, España) [new genus of fossil bird from the Neocomian locality of Montsec (Lerida province, Spain)]. Estudios geológicos 45(5-6):417-425 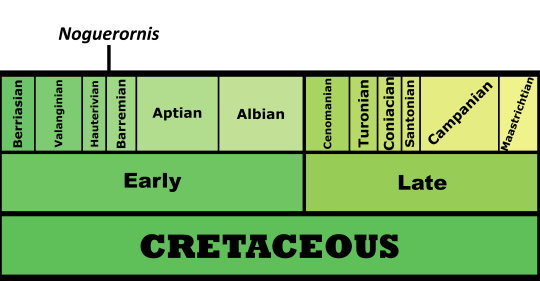